In this blog, I will show you how to mock callout response which is in a managed package. 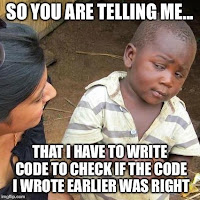 I found out that many developers are using Test.IsRunningTest() in their Apex classes to avoid writing Mock responses for http callouts and if the callout comes from a Managed Package, they are stuck with this message "Methods defined as TestMethod do not support Web service callouts".

As per Salesforce Documentation, "To mock a callout if the code that performs the callout is in a managed package, call Test.setMock from a test method in the same package with the same namespace."

So to be able to mock callout which is performed in a managed package, the line doing "Test.setMock" should be called from the managed package itself.

So what we did in the SharinPix (ISV) managed package, we added a global class which take a HttpCalloutMock class as parameter and execute the Test.setMock from within the package.

By adding the above class in your package and making it global so that it ca be called outside the managed package make it easy to mock code which are doing callout in your package without getting error messages.

You will just need to call it as below:


Example on how to use it:

Posted by Kevan No comments:

What is Remote Action in Salesforce?

In this blog, we will learn how to use Remote Actions in Visualforce Page.

But what is a Remote Action?

Remote Action is a way to access Apex method using Javascript in your Visualforce page.
It allows you to create pages with complex, dynamic behavior that isn’t possible with the standard Visualforce AJAX components.

Remote action method should always have the @RemoteAction annotation and it should be Static.

Let's take an example where we need to retrieve the first five Cases with Status to New.

Posted by Kevan No comments: